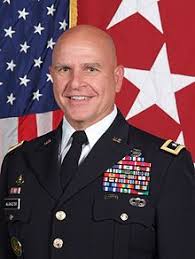 Ladies and gentlemen, dudes and duchesses, I am honored to Astrosplain General H.R. McMaster.  After seeing his chart I suspect H.R. Stands for Hallelujah Rex, because this guy is a boss.  This chart is breathtaking.

General McMaster (or as I will hereinafter personally refer to him at least in my thoughts, Daddy) has two rare major aspect patterns.  The blue rectangle is aka a mystic rectangle, and the red square is aka a grand cross (fixed).   This is very high-level circuitry, wherein various individual aspects of the personality are working in multiple teams on multiple projects.  This native multitasks internally at a very high level.

Compare to Eric Trump, who basically lives in a psychic terrarium.  A quick visual comparison between Eric Trump’s chart on the left and General McMaster’s on the right says 1,000 words:

General McMaster’s is the sort of chart I could (and probably will) study for quite some time.   So let’s start with first things first, the chart leader.  In a chart this dynamic it can be difficult to determine a true chart leader, if the Sun’s ruler is afflicted and something else is greatly empowered, for example.  That could apply here, with the Neptune bucket handle (discussed below) and the Sun at the apex of a T-square.

In this case I am confident the chart leader is Leo, and blazingly so.  General McMaster’s Sun is at 1 Leo, the lion wisely taking the first step into the life at the doorway to his own kingdom.  The Sun here, the individual consciousness, has set about his business on his own terms.  This suggests a pure and simple nobility driving the entire incarnation.  Don’t just take it from me, check the Kozminsky symbol for 1 Leo:

1º Leo: A king stepping from his carriage receiving a document from a group of citizens.
Denotes one who will be enabled to grant or to refuse to grant the wishes of others. He will reach a position of importance and will receive many honors, and benefits will accrue to him. The demand is for an understanding of the use, not the abuse, of power. It is a symbol of Authority.

In General McMaster’s chart, both Vesta (the True Believer) and the North Node are combust, or very close to the Sun.  This coupled with the Sun at 1 Leo as discussed above act to sanctify this native IMO.  A combust planet or energy is one that is sublimated into the overall life at a fundamental level.  Here it is the things he would kill or die for (Vesta), and his actual karmic trajectory (North Node).  These components are golden to my eye, like the dawn itself.

The emphasis here is on integrity and clarity of purpose.  This man knows better than most people that he was born to be who he is.  As always, every coin has two sides.  If General McMaster chooses to serve his negative ego, rather than his actual purpose for existing, then Katie, bar the door.  There will be no helping us if this individual goes against our country.  But I feel very good about him.

The second strongest thing in this chart would be Neptune, the handle of his bucket.   That is surprising, and I’m honestly not quite sure what to make of it.  It does not necessarily fit what I know, or at least would guess, of the man.  For example, I have a Neptune bucket chart.  I am a wacky astrology lady, not a general.  Neptune is about intuition, mysticism, escapism, dreams, and illusions.  It can also be about delusions, confusion, or lies, anything that could be considered smoke and mirrors, including the entertainment industry.  All of that is the opposite of high-integrity military.

Foggy, squishy Neptune seems an odd bucket handle for this highly accomplished military man, and I have to wonder how it is being used here.  Prominent Neptune can point to substance abuse.  Let us now take a brief hockey detour to discuss the Neptune bucket charts of Cain and Abel on ice, Cam Neely and Bob Probert.   The two players are very similar in playing style, and I am a big fan of both.   There were only a few very important degrees of separation in the two careers, and the trajectories were 180 degrees apart.  Cam Neely is now the President of the Boston Bruins, and Bob Probert is unfortunately long gone.  The difference?  Cam Neely and General McMaster both use their Neptune buckets in some productive way, whereas Bob Probert unfortunately took longer to get to that place, and died after massive drug abuse.

In other words, if General McMaster were not able to manage his substances, he would be dead now, like me and Neely and Probert.   I am not a substance abuser either.  I also use my Neptune bucket handle as a way of coping with the world, a private happy place that I never leave.   So General McMaster has some sort of escape that works for him, and you know, it could be that he builds trains out of matchsticks.  Neptune does different things for different people based on personal dynamics.  He is moving too fast to not be in control of his personal behaviors, based on evidence.

Another thing I don’t expect to see in a general is Jupiter in Pisces.  Pisces is where things dissolve into each other, like at the bottom of the ocean, where Neptune is king.  Then Jupiter is where the government seeks to manspread across not only the planet but the solar system.  Hard to do from the bottom of the ocean.  Authority figures may find such a native contrary to the mission, though General McMaster’s overwhelming King vibe may have countered that in practice.  I would expect a Neptune bucket person to make military leadership vaguely uncomfortable, like he can read their thoughts and they don’t trust him.  But apparently not.  Maybe he read as more of a guru to the people he worked with.

I see that Jupiter can be considered a co-ruler of Pisces, and maybe I just don’t get that.  But I can definitely see a true love of humanity, a deeply-felt compassion and connection to humanity overall, in these Jupiter and Neptune dynamics.

Also, General McMaster’s Jupiter is conjunct Chiron, the Wounded Healer.   Chiron is a fragment of a destroyed planet, and carries the vibration of picking up the pieces and moving on.  I can’t think of a better collection of attributes to place in the Oval Office at this time, especially with someone this capable.

Like love, this chart is a many-splendored thing.  The grand cross gives him basically a psychic piston engine, where friction is constantly being generated, and there is a perfectly orderly means of using it.  His oppositions land in Earth, air, fire, and water signs, making him a superlatively well-balanced individual, even in extremely dynamic situations, able to withstand extreme speeds and pressures.  Because the grand cross occurs in fixed signs, it provides a certain stubbornness and firmness that is undoubtedly useful in such a busy chart.

The mystic rectangle acts as a sort of counter-process to the piston engine of the grand cross, like a steering system.  Thank God for him right now.

Another lovely thing about this chart to quickly mention, he has both Ceres and Juno in Cancer.  I suspect (and hope) he had a mother who was the picture of a saint, and his wife follows the same suit.

Most special, though, even with the impressive Leo and the very fancy circuitry, is the superstar feature of this chart:  both Mars and Pallas Athena on Aldebaran.  I have personal feelings about that.  I will save 1,000 words.

Aldebaran is the star associated with the Archangel Michael, the leader in the fight of good vs. evil.  It is opposed by another star, Antares.  The two are a pair of opposing influences with a very strong polarity.  To align with one is to come directly into the line of fire of the other.  General McMaster has chosen a side for real.  (Erik Prince has Mars conjunct Antares.  Other prominent Antares people in this administration include Betsy DeVos and Ivanka Trump.  Interesting to wonder how he bounces off of them.)

Pallas Athena is the field marshal, the one who identifies patterns and creates strategies. She has the effect of strengthening Mars and supporting him in his clarity and leadership, especially when opposing Antares, literally Mars’ mortal enemy, on Aldebaran.  This is bold as hell, his Mars/Aldebaran/Pallas, and gives me goosebumps especially with his 1 Leo Sun.  The world didn’t contain a road high enough for him to take, so he made his own.  Either that or he is a really sneaky, really evil jerk.  Seeing as how Erik Prince isn’t the Viceroy of Afghanistan right now, I am still a McMaster fan.

The to do the astrological algebra and check the other side of this, how my theories might hold up, he happens to be a general, holding down the fort in the biggest shitstorm America has ever faced.  As bad as things look, I now believe General McMaster is the duct tape holding our government together.  I can only imagine how much worse things would be without him there.   I will say again, General McMaster came to this planet having chosen a side, for real, and I thank God for him.  If there is a Sully Sullenberger in this, it is General McMaster.    If General Kelly has a chance, it is with General McMaster.  My sense is that McMaster helped get rid of Flynn, though I have nothing but intuition for that.

The extensive circuitry in this chart makes it impossible for any one planet to definitively get the upper hand over any other, aside from the Sun.  In other words, General McMaster stays on the agenda he was born to complete, reflected in the North Node generally.   Specifically his North Node is conjunct the Sun, keeping his consciousness wed to the end result of his life.  General McMaster has his own karmic alpha and omega thing happening. 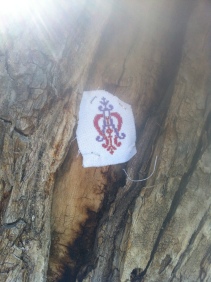 When you look at a life from the (oversimplified) idea of reincarnation, you may think of the consciousness as a dragon, plunging down from the sky into the water at birth, then living the life as it goes through the water, then pulling its head back up out of the water and going back into the sky at death.   The South Node is where you came in, and the North is where you will go out.  Thus the North Node is a perfected spot in any chart.

That is all I need to say on this for now.  I just wanted to let people know the good news, lord knows we need it.