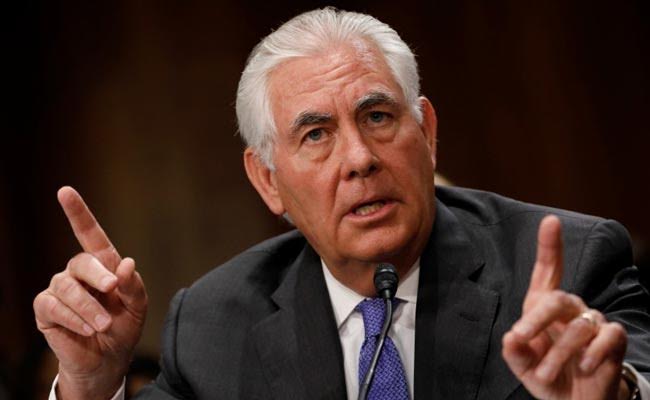 Gentle reader, at the risk of phoning it in, allow me to Astrosplain Trump’s cuddle bear extraordinaire, Rex “the Tillerman” Tillerson.   Maybe it’s that sexy Russian Order of Friendship, maybe it’s that he’s the JLo of geopolitics, having his people instruct people not to make eye contact.  I don’t know what it is, I just don’t like him.  So let’s not dawdle on the dregs during this solstice.  But still there’s a need to know, you know.  I’ll be brief. 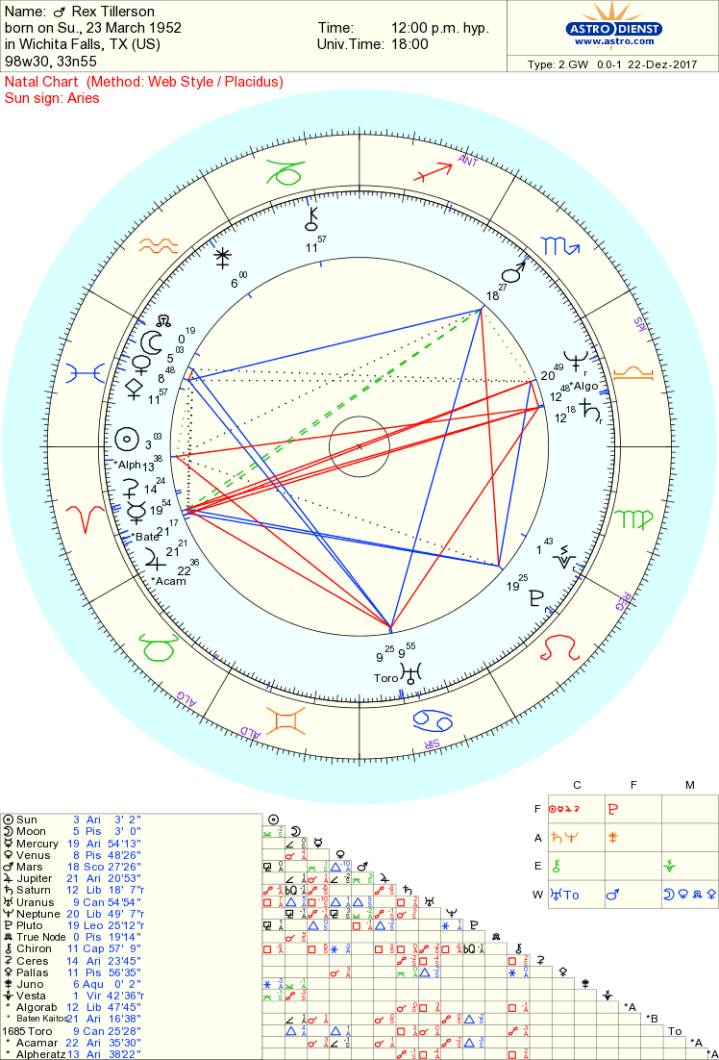 So the Sun here is at 3 Aries, making this a Mars-ruled chart.  However, at a glance we can see that Uranus is vying for that spot.  Mars is one of the traditional Greater Malefics, thought to bring bad luck into the life due to the negative behaviors associated with the god of war.  Rex’s Mars is in Scorpio, co-ruled by Mars himself and Pluto, the Devil.

Having the god of war ruling the chart tells you how Rex became the head of Exxon Mobile, I guess.  I would like to see a strong Jupiter in any CEO at that level, and oh, hey, wait a minute, Jupiter is conjunct fixed stars Baten Kaitos and Acamar.  It’s also conjunct Mercury.  Baten Kaitos is named for the belly of the whale, and is a reference to Jonah.  And yes, I’d have to say being Trump’s Secretary of State would be kind of like being swallowed by a whale, even if he knew how to do it, which he doesn’t.

Both of those stars, which are not super common and I don’t have a great feel for, suggest a Saturnian influence, like the trial of being swallowed by a whale.  Acamar is said to confer greatness and success in public office.  I would have to say he probably was quite successful at Exxon, which some people believe is eerily similar to being Secretary of State.  That’s pretty #sad.  The circumspect, reserved nature of Saturn has undoubtedly helped Rex hang in there this long.  Acamar is said to have a Venusian, loving influence that I don’t see.

Anyway, back to the beginning, Rex has the Sun conjunct fixed star Alpheratz.  Another less-known star, this one is said to be of the nature of Jupiter and Venus.  Again, I think Exxon CEO and Secretary of State covers the Jupiterian part of Rex, which is really not the main thing.  Mars is ruling the chart, giving a sort of Alexander the Great feel to his Jupiter, making him more aggressive and tougher than he would otherwise be.  But Uranus is the energetic fulcrum of this chart.

Uranus is conjunct Toro the Raging Bull.  This Uranus placement is magnified by a number of factors:  It is in a grand trine, the big blue triangle in the chart, and at the apex of a T-square, the red triangle.  The grand trine is a hub around which the person’s energy moves very easily, all the way around the horoscope with at least three planets cooperating.  Then the T-square is a permanent internal friction point, like a bone spur on your personality.  Uranus, Mr. “I gotta be me,” is at the center of that internal conflict.

This is a locomotive chart, where the native is focused and driven, a high achiever.  This chart is quite common in this administration, everyone from Stephen Miller to Wilbur Ross to Hope Hicks.  The easiest way to get a job at the White House is to emerge from the appropriate birth canal.  Second easiest way is to have a locomotive chart.  In general Rex is more likely to be a checkers player than a chess player, due to the complex circuitry in his head.  He’s not as dumb as most of these jamokes, and may not end up in prison.

Rex has Saturn the Sourpuss prominently in opposition to all kinds of stuff, including his Sun.  That’s why even with all this Acamar and Venus and Jupiter he’s still a big pill that nobody wants to swallow.  He’s also doing a terrible job at statesmanship, which he thinks is like running Exxon.  And unfortunately in this administration it kind of is.  Anyway Saturn helps with the sourpuss attitude, patience, reserve, ability to not say you called him a fucking idiot, not tell him he is a fucking idiot, all that.  It makes you love money, too, and bossing people around.

So Rex has kind of a lot going on in this chart.  But as I said, it’s Uranus, Mr. I gotta be me, who has the mic for the most part.  Mars has certainly helped Rex get out there and get some things done.  But having subordinates tell other people not to look you in the eye is pure Uranus, which is sometimes pronounced “your anus” or “urinous.”  Uranus is about believing that you are an island.   It can be part of a messianic complex, which sounds intense but really a lot of people have it.  Most men go through a phase, and some never quite finish it.  Uranus is about feeling lonely and isolated, like you’re a planet of one.  Sometimes that drives other people crazy as they try to connect with you.  Uranus, that misunderstood loner, is really at the core of his energetic processes IMO.

The locomotive chart has two features:  an engine, the planet leading the train, and a big empty spot.  Rex’s engine is the Moon, which is early in Pisces, conjunct Venus and the North Node.  I expect Tillerson to have a fairly close relationship with his wife, and may have a number of loving women in his life.   Mars, Uranus, Venus, and the Moon are all in that lovely, flowing trine.  Then Uranus is in the T-square as well, thus playing a role in both the positive and negative circuits.  Pisces (back to the Moon) is ruled by Jupiter, which you can see is rather prominent here, and Neptune.

Rex’s Neptune, his integrity, has some issues.  It’s opposition Mercury, which should help him believe his own propaganda to a large degree.  I don’t expect Rex to have any significant personal integrity, despite adamantly being his own man as his prime directive.  When I consider the people I have known with that sort of personality, they are much less effective than they otherwise would be without the chip on their shoulders, if that makes sense.  Insisting on doing things your own way, following your own star, is not the same as being honest with yourself or others.  It’s more like having your own way, especially in a chart with this kind of Mars and Jupiter.  When Neptune goes squishy, expect very flexible interpretations.

The Moon is about moods, gut feelings, intuition, dreams, and the uncontrollable things of life.  So Rex is a moody guy for sure, and is probably very good at what he does — which again, should not be Secretary of State.  He does not have that famous Seginus the Guard contact that would link him to Trump personally.  But he does have a prominent Algorab the Crow conjunct Saturn, of all things.  Algorab is a dark star, imparting a certain pettiness and love of money.  I’ve discussed Algorab in depth in the charts of Paul Manafort and Roger Stone.  This is another prominent star in this series, importantly not Trump-specific.  The crows are people who are on a shared materialist agenda, piggybacking on the Trump administration.  Sometimes nice people have it too, like the Mnooch’s non-evil twin John Oliver.  So calm down.

As I said the other component of a locomotive chart is that empty patch.  The center of the empty spot is a sort of psychic drainhole, where nature abhors a vacuum.  Here we see the bull’s eye sort of in the beginning/middle of Capricorn, and there is Chiron the Wounded Healer almost dead center.  That can be thought of as a sort of accidental dignity, where a lesser chart factor becomes prominent due to placement.  The metaphor is pretty self-explanatory, Chiron is the asteroid I would use to describe such a psychic hole in a chart even if it didn’t happen to be a locomotive or wasn’t sitting right there.  Chiron is a shard of a destroyed planet.  You can either long for the way things used to be, or get used to being lighter and smaller.  My sense is that with this prominent Mars and Jupiter, and especially with that sensitive Pisces Moon, Rex wants the rest of his old planet back.

There isn’t really so much to say about this guy, no great surprises in this chart.  He has Vesta the True believer a smidgin off of Regulus the Heart of the Lion.  As I’ve said elsewhere, I’m becoming very generous with my orbs, when I see facts of the life that fit the traditional understanding.  Vesta on Regulus would make one truly believe they are fit to be king.  That may not be the case here, it could just be the moodiness of his Moon combined with the aloofness of Uranus.  Anyway even if he has one star in common with John Oliver, I still don’t like Rex.