I have been making things all my life.  But until a couple months ago, I was a craftsman.  I didn’t really understand the difference between arts and crafts.  For as long as I can remember, I have been enormously anxious about drawing.  I have always felt that I wouldn’t be able to draw a representation of something in my head even if I knew what to draw.  I thought of myself as an artist only in the smallest possibly way.

A couple of months ago I became aware of the support network of mentally ill artists who are not currently alive.   Understand that there is nothing special about me; anyone can access these guides, or any others, based on the common themes that are shared among the living and the dead.  The more I have opened myself up to their support, the more aware I become of the extreme support that is available to me as an artist.

I receive emotional support from luminaries of the art world whose names I won’t even mention.  Not that I am on their level as an artist.  But they appreciate how much I have tried and what I have to say.  And they all have something about their own process to share.  The ones who were not mentally ill, some of the most famous masters, are hyperfocused individuals like myself.   They had rich inner lives, like me.  But they were able to negotiate the outside world much better.  They mentor me, and many others, in managing this particular gap, between your head and the world.

I did my first painting since kindergarten this weekend.  I didn’t like the way it looked at all.  And I am learning through my mentors that how it looks is not so much the point.  The question is what I can reveal to myself in the doing of it.  Through my many years of craftsmanship, one of the main things I revealed to myself was disapproval.  Eventually it came to a point where I noticed that it was equally arbitrary, whether I approved of myself or not.  I just chose to validate myself 100 percent of the time, which was really difficult and took years of dipping my toe in the baby pool.  The hardest part was just convincing myself that that would be possible, then that it’s an okay way to live.

I’ve taken a tip from another deceased mentor, the next one I’m Astrosplaining so I won’t spoil the surprise.  But he suggested I put my work up around my room, where I can look at it all the time.  That quickly turned into me being in love with my own work.  I suddenly find myself interesting and worthy of study.  The painting above shows my depiction of my eye color, that was what I wanted to paint.  Then I just went with it.

This is an ugly painting, but I chose to love it just because I drew it, and it’s about me.  That’s all I need now.  And this morning I see what the point was, what my mind was showing me about myself:  the mouth is very close to my own ear.  The ear is much larger than the mouth, which has been probably my #1 life goal, so mission accomplished, et voila.   This is entirely new way of living, one that finally feels like there’s a great reason for me to exist.

Most importantly, I am learning that I can use my creative process to change my life.  I am working on a piece called The Winner, below. 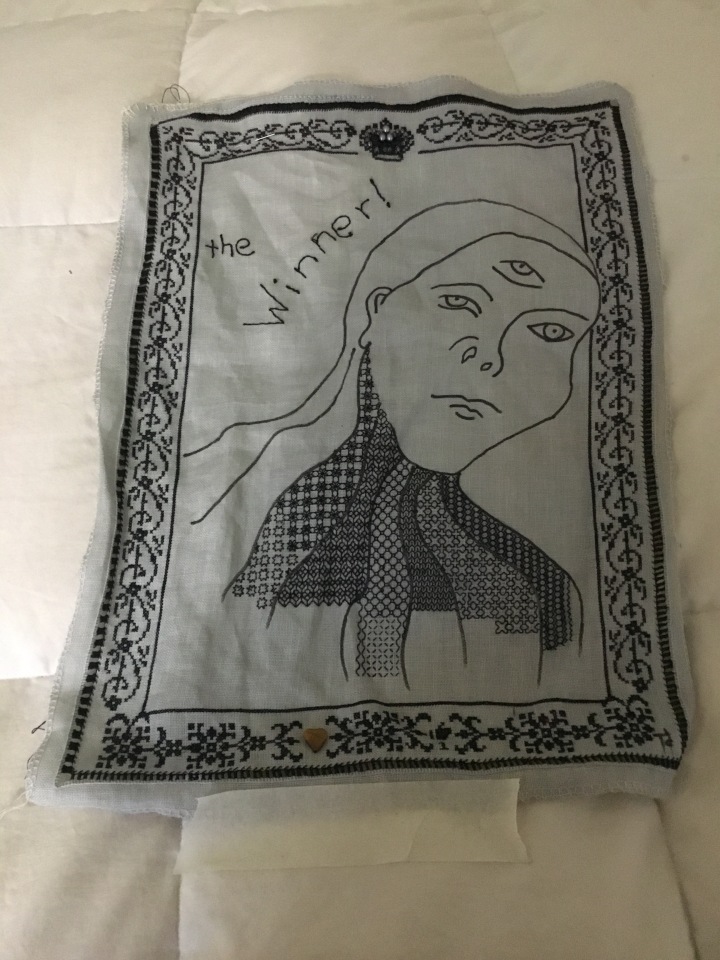 This was one of the first two drawings I ever did, the night my guides carried me over the threshold into believing that I could draw.

I started out stitching this piece with a different crown.  I had wording along the bottom, started out with a different edging pattern.  There have been about fortyleven million stitches in this piece that nobody will ever see, because I ripped them back out and changed them.  What I now have at the top and bottom is perfect.  It gives me three reflections of the trinity that I did not notice until I left it up on the wall for a while:  the crown’s three pearls, the three eyes, and the three motifs in the margin:  crown, heart, and hand.  It was unintentional, but these three symbols comprise a Claddagh ring.  That is a traditional Irish ring featuring hands holding a heart wearing a crown.  The symbolism is friendship, love, and loyalty; this is a promise ring.  Once my guides showed me that I had inadvertently stitched a Claddagh into my self-portrait, I got the message.

I had originally stitched “congratulations, betch,” in the bottom margin.  This piece is about the near-death experience I had at age 7.  I chose to return to my life, despite being warned that it would be grim.  I felt like I had won by surviving.  Then within 24 hours I deeply regretted that decision, and that was how I felt about it up until a few months ago when I started this piece.  My perception of all of that has changed dramatically in the making of this piece.

For one thing, it has allowed me to realize that the child that I was and the woman I am are not two different people.  There is simply a third viewpoint that shares both, and that is the power spot for me.  Importantly, I stopped resenting the child that I was for choosing to live through extreme abuse and neglect, rather than remaining dead and not being conscious of any of it.  In the making of this piece, I am discovering the perfection of my trials and tribulations, including my death.  Total win.

The idea that I could not only do my own design, but make it as easy as drawing on it with a Sharpie and being fine with whatever happens, that is a new level of liberation that I don’t have a word for.  Emancipation isn’t quite strong enough.  I exist now.

In stitching The Winner, I am bringing closure to the fractured, unsupported first part of my life.  I can knit all of these things together into one person who can go forward knowing she has already won.  I can’t emphasize enough that this is how magic is made.  I have created a totem, and it has shown me how to get where I’ve always wanted to be.

I hope to have The Winner completed by New Year.  It’s possible.  Mostly that is symbolic on my part, it would be amazing to feel complete in this way to start the new year.  But I’m fine letting it take its course.  I’m not in a hurry to become someone better anymore.

Once I am done with The Winner, I will dig into Level Playing Field in earnest.

Like The Winner, I began feeling my way around in terms of what I want to accomplish with this by just threading up a needle and diving in.  Since this was photographed I have stitched in a large motif that will be ripped once I’m done with The Winner.  I have changed my mind about the designs on the linen part of the piece.

Last but not least, over the Christmas holiday I pampered myself by painting.  Painting, like drawing, is something I’ve been super anxious about.  I am not confident that I have good taste or the ability to compose or render artwork that will please me.  So I made some papier mache pinatas and piggy banks.  The stakes are pretty low, I’m easing myself into feeling like a person who paints.

This lovely piggy bank has an extra large capacity, with plenty of space for both dollars and rubles!

And unlike boring piggy banks, this one is an action figure.  Look, he’s Tweeting! 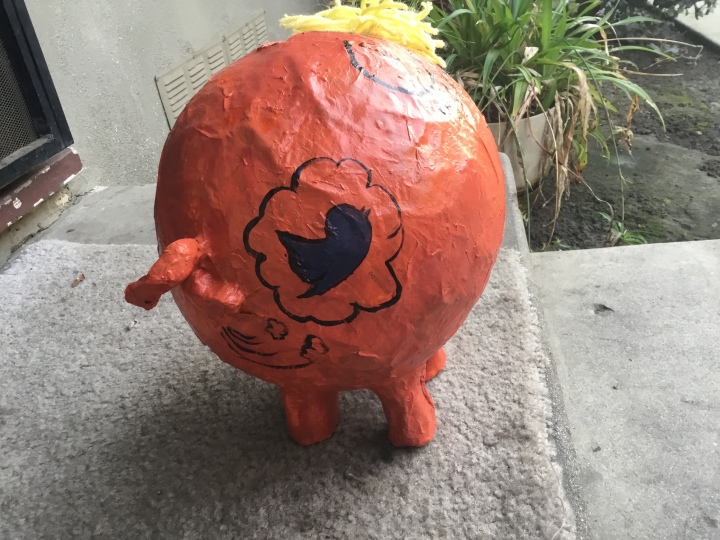 All kidding aside, I am fresh out of both weed and money.  So if you’d like to purchase this handcrafted American treasure, hit me up at artnunymiss on the gmails.

Thanks for touring my studio!