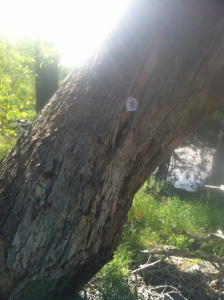 A beautiful thing has happened.  Like the flap of a tiny butterfly’s wing down by the river, a breeze has begun.  Let all humanity rejoice.

It seems quite small, and may not be permanent.  But a federal judge has stood up to the unconstitutional, anti-human laws that make homelessness a crime in America.  The Orange County Catholic Worker has gotten a federal judge to rule against this cruel and bizarre reality of American life:  it is unlawful to be homeless almost everywhere in America between 10:00 pm and 6:00 am.  You must be indoors, or be subject to the law.  Obviously the goal is not to shelter people in jails, only control them, i.e., make them move.  My heart swells, knowing this obvious question is being asked.

During the years I spent living in my van, I saw how people who live indoors are an upper class.  I had a disability check so I never panhandled, had my own sanitation, didn’t mess anyone’s lawn. Yet often if people saw me parked anywhere, just parked in their neighborhood even in the daytime, they called the cops to chase me away.  The picture above is from one ideal spot that I found near a river, outside of a town that didn’t mind me being there — and didn’t have any housing I could afford.  Getting back to an indoor life was very challenging, I won’t lie.  Society wanted to expel me.

I once had a librarian call the police to tell me to move my van from in front of the library despite being legally parked.  The police couldn’t actually tell me to leave, only said that the librarian wanted me to, so I didn’t.  I continued to hang around that library every day that I needed to, because even if I weren’t a citizen, I do understand that it is my library, and in real life that guy works for me.

Property owners in America tend to feel like they have dominion not only over their homes, but their entire visual range.  This is a direct reflection of our slaveholding past.  White people in America often feel like it’s their planet to kick people off of.  Nobody cares where the homeless to go, as long as it’s “not here.”  People never seem to touch base and see that hey, we actually want the homeless to just stop existing.

I’ll just say it:  the anti-camping ordinances in this country are not only unconstitutional, they are irrational and cruel.  For all intents and purposes, it is illegal to be homeless in America between 10:00 pm and 6:00 am.  Home-dwellers as a group don’t care where the homeless go, as long as it’s “not here.”  If they thought about it more, or were more honest about it, they’d see that they would rather the homeless simply didn’t exist.  And that, dear friend, is one of those banal evils that I would never like to see you fall into.  You cannot know how people look to me, when they are telling me which parts of my father’s beard I may touch, at which hours of the day.

We can also take heart in knowing that a federal judge has been forced to answer this very obvious question, about whether everyone has a right to exist or not, in this time of #BlackLivesMatter and #MeToo.  Remember that the last will be first and the first will be last, and the meek shall inherit the Earth.

Just in time, too!