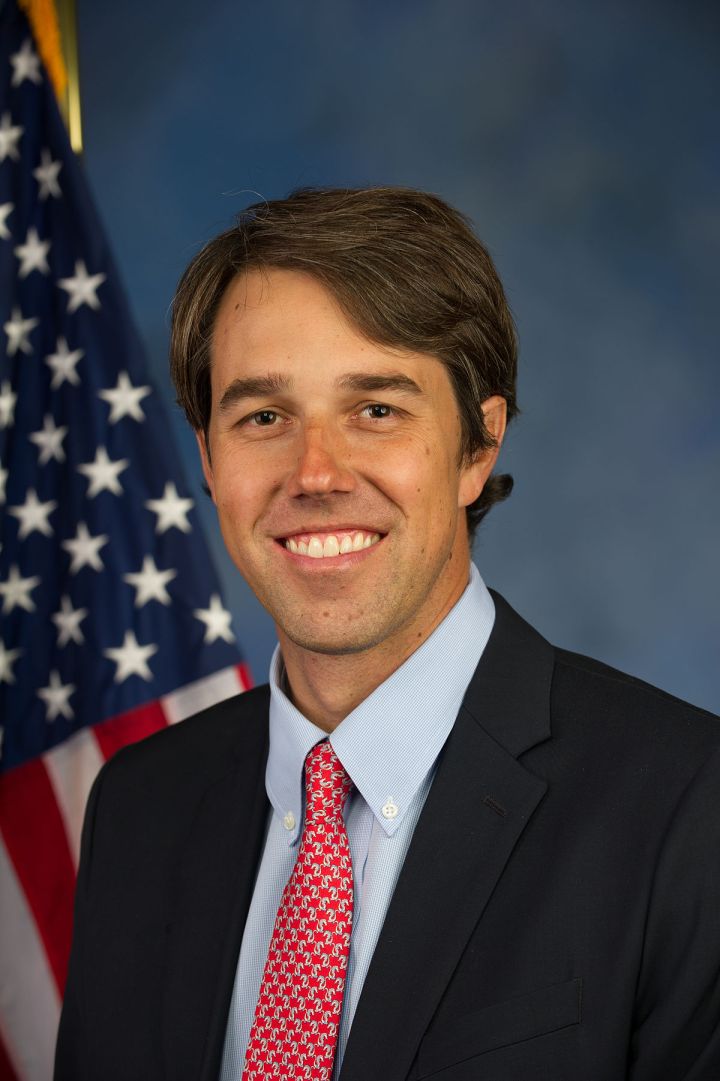 I’m branching out into Astrosplaining people of general interest, not just people whose awfulness freaks me out.  It’s a new kick I’m on.  I’m actually neutral on Beto.  I’m too old and snake bit to fall in love with him, is what it is.  He’s definitely better than Ted Cruz, the second-worst Ted of all time after Nugent.  But pretty much anyone running as a Democrat also gets a well-deserved side-eye from me.  All these years later Orrin Hatch and Chuck Grassley are still calling the shots. Anybody that inept is complicit IMHO.  There’s no excuse.

Just for fair warning,though I am a progressive and support the full swing to the left I am not one to blow sunshine up your butt.  I call them like I see them.  I’m too old to play games.  And I’ve never had enough extra energy to lie.  But that puts me at odds with society, when I’m a cynical GenX buzzkill.

Anyway with the midterms rapidly approaching I figured I should review the players in the game to help those of you in America make your electoral decisions.  So let’s start with Beto. 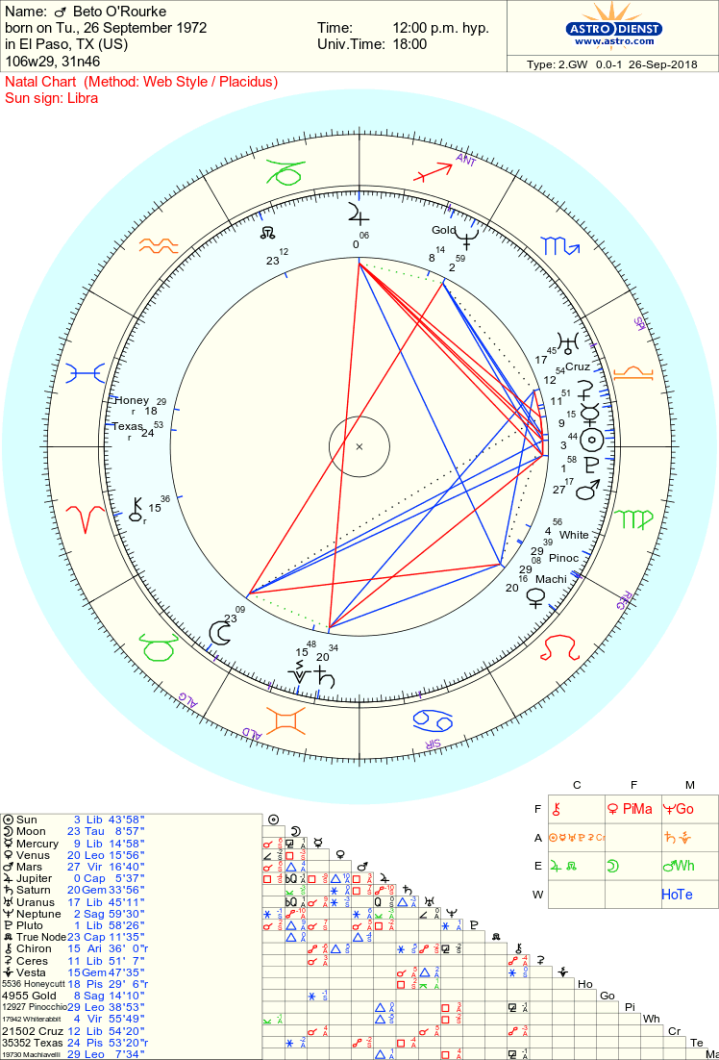 First order of business, I really do wish I had a birth time for both Beto and Ted “Soup’s On” Cruz.   It would be lovely to know where his houses and angles are.

The first thing, the Sun is early in Libra.  That makes this a Venus-ruled chart, and that makes perfect sense to me.  The whole thing with Beto is his likability versus his opponent.  Venus is a people pleaser.  Back in Chicago we called guys like this “honey dipped,” because women would just stick to him like flies.  Russell Brand has this, too.  The charming factor.  This is a super unfortunate opponent for the man they call “blob fish.”  When Cruz tried to use that picture of Beto in a dress from his punk band days, look how that blew up on him.  Women love this guy.

Then the Moon is in Taurus, conjunct the famous blinking demon Algol.   So both of Beto’s luminaries are ruled by Venus.  This will very much add to the honey dipped nature of this chart, the ability to see himself reflected in others with this explosive Moon.  Algol is where we take the lid off of Pandora’s box.  Algol can take the native anywhere they want to go, open them up to untold exploration.  But as with any such high-voltage influence, any loss of integrity will have dire results.  It’s like driving:  any mistake you make while speeding has much worse consequences the faster you’re going.  As a paramedic any helladocious wreck I ever went on — the kind where we searched for bodies in the treeline — excessive speed was a factor.  Astrology is the same.

Without being able to see the angles and houses, Venus and the Moon are the only strong planets in this chart.  This person is more of a mirror than anything else.  Of course there’s more to it.  I don’t have the houses and angles.  But this is what I can see for now.

Venus herself, the chart ruler, is in Leo.  This is a little unfortunate because it puts her at a minor hard angle to the Sun, and they are in mutual reception, placed in each other’s signs, guests in each other’s homes.   This automatically sets the chart off on a superficial footing.  This is not a huge sin.  But again I’m not one to blow smoke.  I’m giving you what I actually see and comparing with what I know.  It just feels weird doing it to someone I don’t hate.  Full disclosure!

Also Venus is less than a degree off of an interesting fixed star called Ras Elased Borealis.  Quote from Jamie Partridge at the linked site:

“Credited with properties such as conveying higher spiritual gifts of the Logos to those men who are able to conceive them. In primitive natives, this star may become a danger, if bound up with a poorly placed Saturn or Neptune, severe psychological depressions are indicated and possibly even suicide. In conjunction with a ‘strongly’ placed Mars, the Lion’s Head will make for feverish diseases and if conjunct with Uranus, dangers of accidents are present. Bismarck had this fixed star positioned exactly conjunct his Ascendant; this fact as well as the part played by other configurations gave this chancellor his mental superiority.” [3]

This star is not used as much in astrology as Ras Elased Australis. I used though, it gives the quality of looking carefully at a situation before forging ahead into it.  [Emphasis mine/Artnunymiss] [4]

I feel like having this on the very prominent Venus is auspicious, giving this walking candycane possibly the depth and grit to pursue what he’s up for.  A little Saturn and Mars will not hurt this boy, though his Mars is combust in passive-aggressive Virgo.  Although  Beto has other factors that could make him quite the greedy hot mess, which I’ll get to.  But overall my concern with him is superficiality and lack of core conviction. That isn’t necessarily affected directly by  the Ras Elasad placement, per se, but it suggests he may be okay in that department.  Better conditions for integrity than I would otherwise expect.

So before I get to the other bits of the chart let me note a couple of things that pop out.