Ladies and Gentlemen, Yahoos and Yippies:

In the interest of the public good it’s time to take a look at Kamala Harris.  For one thing I am serious about getting my focus off of horrible people.  It’s almost as hard as kicking coffee, and I thought I might die from that.

As I keep threatening, I plan to do a number of Astrosplained books on Kindle.  They will all be cheap to buy and free to read in Kindle Unlimited.  They will all focus on people who make my life better in some way, like Nikola Tesla, Edgar Allen Poe, etc.  But that’s for when I have more energy.  I’m also really excited to start writing fiction — look for my first novel this year too.  I live with multiple disabilities, so thanks for hanging in there with me when I can’t blog.

Despite discussing a number of chart factors at length, like 3,500 words below, I didn’t say everything there was to say about this truly fascinating chart, even with the 30-minute video.  Really this chart is worth a whole book.  Extra fancy.

The de-crapified chart for clarity: 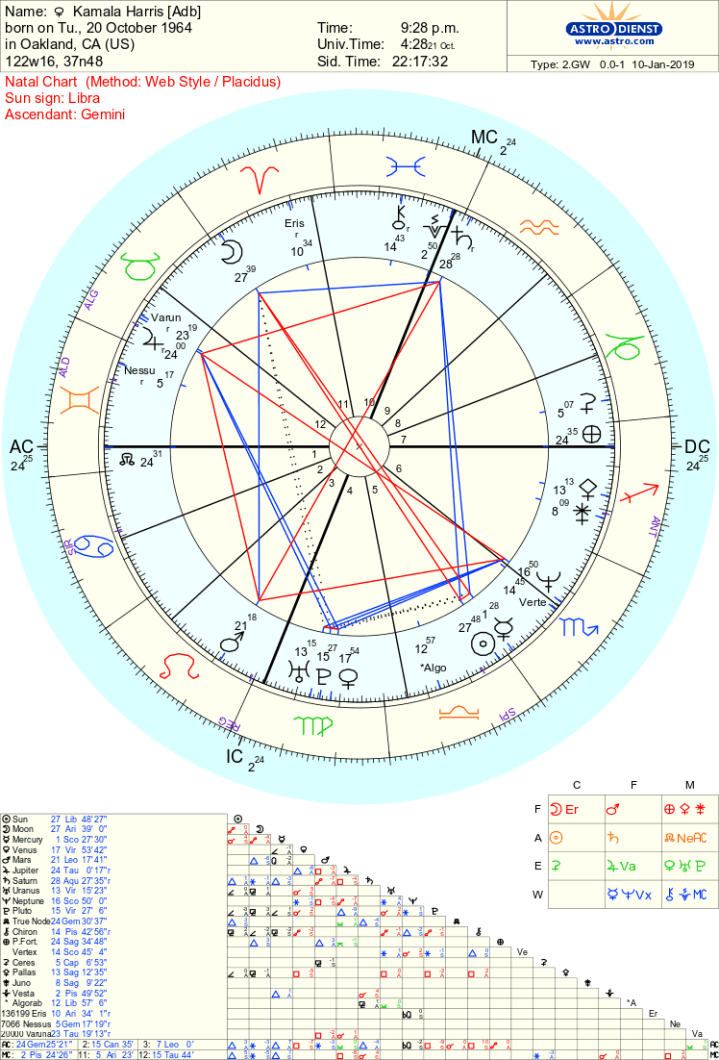 Weird for a Libra, she doesn’t seem to get along well with Kierstjen “Baby Cages” Nielsjen, either.

So I have to say, speaking now as a Democratic Socialist rather than an astrologer, that I have very little confidence in the Democratic establishment, which unfortunately includes Senator Harris — at least for now.  It’s a hard thing, because I understand that especially for African-Americans, you really have to work from within the system to change it.  The thing that concerns me about all of them, including Corey Booker who I otherwise love in several ways, is that they’ve all had to take corporate cash to get where they are.  That’s why Alexandria Ocasio-Cortez can tell the establishment to suck it:  she only took money from we the people, not Mitt Romney’s friends the corporations.  I distrust Speaker Pelosi largely because her leadership comes at the expense of beaucoup corporate fundraising, polluting our political process.  Because John Lewis asked me to, I bit my lip and supported Hilary.   But this is a new day, and I have new hope.  Especially after seeing this chart, I love her and can’t wait to vote for her in 2020.  Unless somebody catches her being truly awful — and it’s going to have to be really bad for me to not like her anymore — she’s the one to watch.  /soapbox

1º Gemini: Two Ionic columns adorned with globes–a burst of flame issuing out of clouds behind.
Denotes a double-natured, cultured, and gifted person who gains reputation through his acts. He has great mental energy and will, combined with an impetuosity which directs to good or evil results. His over hastiness may lead him to mistakes which incur displeasure and court danger. It is a symbol of Animation.

That symbol bodes well generally, but does suggest that the WhiteRabbit thing of “haste makes waste” could actually be her Achilles’ heel.  Specifically, aside from taking the time to think things all the way through — Venus likes to skim the surface — I would advise her to avoid creating unhealthy partnerships, especially with warmongers of any kind.  I don’t see that becoming a problem for her, honestly.

At the end of the day, this is a formidable woman.  She has an enormous amount of creativity with government (Jupiter on Algol), truly an outside-the-box thinker.  With her Mercury Ascendant and chart-ruling Venus in Virgo, she has the intellectual bandwidth to do whatever she needs to do.  Regulus, with its prominence on the IC, promises to take her as high as she wants to go, and guarantees that if she fails in her responsibilities, if she betrays her position, if her integrity flags in any way she will crash and burn in spectacular fashion, just like Harvey Weinstein, and many other Regulus types.  It’s quite all-or-nothing, with both Regulus and Algol, in terms of what direction the life will take.  There is no medium setting on either of those.

So there’s more to say, and I’m sure I’ll say it in the video.  Long story short, I like Kamala Harris much more, trust her much more now than I did before seeing her chart.  Prior to looking at her stars I looked askance at her due to the corporate sponsorship, just like the others.  But considering that her Vesta is also on the Midheaven, conjunct Saturn but in Pisces, ruled by Jupiter and Neptune, I feel like she is as advertised.  Vesta is what we would kill or die for.  The proximity to her strong — and not actually prominent — Saturn is highly auspicious here IMHO.  She’s a true believer.  Godspeed.