A friend of a friend named Nancy wrote in with a question for Priscilla.

Since you didn’t ask a question, I did a general five-card layout. Here’s what each position in the layout means, and what card you have in that position.

You didn’t ask any question, so I determined a starting point. I do that by finding out your significator (the Queen of Swords) and cutting the deck four times – money, challenges, love, or work. This layout looks very much like it’s about work to me, so I was surprised to see the Queen of Swords in the “love” pile. She’s upright, so this is something you are conscious of, whatever this layout is touching on. It’s something close to your heart.

This reading features two “exalted” Aces, Cups and Pentacles. The Aces are powerful new beginnings, like an angel reaching out to hand you a little gift in some way. An Ace is always the divine hand blessing you. When one of those appears, I put it at the top (exalted) and it colors the whole layout. You had two in a row. The Hanged Man replaced both of them. Both Aces affect everything in the layout.

Aces are a sign of winning! They mean things are going well for you, or can if you allow it. The Cups represent emotions. The Ace of Cups can be a new romance, or any new thing in your life that really thrills you. The Ace of Pentacles can mean starting a new business, making an investment, possibly a bit of luck like a windfall, or even having a baby. It’s something that starts out small and pays off in ways you can see and touch.

The King of Wands is a man in his prime, a rock star in his life. He has the means to fulfill his dreams. He’s the man with the plan, the mountain mover, the Getter Done of Things. The caution here is that you don’t become the Emperor of Nowhere. If you get bossy and assume everybody’s behind you, it might not go well. Make sure to appreciate your supporters. 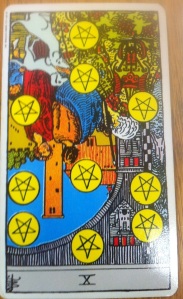 This is the “happily ever after card.” All of the Pentacles focus on money and material things. That does include your body and your home, so the Pentacles can be about health or just basic stability in your lifestyle. Here we have all the generations relaxing together. Things just couldn’t be better. This is harvesting the good things in life.

When reversed, it’s not so much. I get a sense of feeling like things aren’t going to pan out, like you don’t see things necessarily heading in the direction you dream of. Priscilla asked me to remind you that whatever you believe, that is what ends up being true for you. Whether you believe you will win or lose, you are right.

This card is in your “momentum” position, or the direction Priscilla sees you heading. This card is in the center of the layout for a reason – this is the main point that brought it home for me. My sense is that you are thinking about abandoning some project that really excites you. The court cards in tarot can mean the querent, or other people in their lives, or both. Do you have a woman in your life who rains on your parade? She’s cramping your style. Is it you?

This card is just what it looks like: a farmer working hard and waiting. His fields look great, it’s only a matter of time for him to collect – if he stays committed. But the sky behind him is gray. It doesn’t look like he’s having fun. This is Priscilla’s way of telling you that courage and determination are what’s needed to realize your dreams. Just like a farmer, there’s a natural process that you have to guide. But nature’s course is mostly very predictable, if you hang in there. The only thing that can screw up his harvest at this point is him. 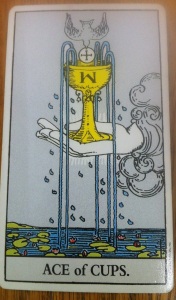 I explained above about the Aces being exalted, and when they appear, they affect the whole reading. Both of these fell, one after the other, in the “Gift” category.

The card that replaced them was the most important card in the layout, not only because of the two Aces but the nature of the card itself. The Hanged Man is the only “Major Arcana” card in this reading. The “Minor Arcana” (the ones that relate to a playing deck) are the things where you can say, “this too shall pass.” It’s the daily comings and goings of life. The Major Arcana, on the other hand, is the 22 stages of human development that everyone passes through.  These are life-shaping events and concepts.

The Hanged Man says one thing very clearly: To Thine Own Self Be True. You would think it would be terrible to be hanged, right? But look at the man. Does he seem upset? No, his halo is bright. He has a higher perspective than the other people in his world. So whatever they do to him doesn’t mean a thing, because he’s his own person and that’s not up for debate. They can do whatever they want, even hang him, and it won’t affect his mind.  Gandhi, Martin Luther King, and many more knew that they were speaking the truth, and I don’t think they would have any regrets for the lives they led.

All together this reading is pretty clear. You have a smoking hot idea, something you’d like to pursue. You have naysayers in your life, maybe just yourself. You might not feel comfortable being seen as “bossy” or “bitchy” if you plunge full steam ahead (Queen of Wands reversed). Priscilla is very sure that whatever you’re cooking up, it’s going to be a huge emotional opening for you (Ace of Cups) and will make your life better in ways you can see and touch (the Ace of Pentacles).

The Aces are always like an angel reaching out to hand you a winning ticket. Cups are about feelings and love, and Pentacles are about money, the body, and other material things. This suggests that you may not know what a great idea you’re on top of. Both of those falling before the Hanged Man is like saying, “Go for it, shine your light, and you won’t be disappointed!”

Priscilla’s advice to me, you, and everyone is to follow your own star, and this reading is a great example of that. When you think about something that really excites you, opens up lots of other happy ideas, you’re on the right track. Don’t let anybody convince you that what you think would make you happy is incorrect. Follow the feeling of joy and you will never, ever go wrong!

Lastly, Priscilla asked me to share a little astrological food for thought. You have both Mercury and Mars at 8 Aquarius.  Here is the Kozminsky symbol for that degree:

8º Aquarius: A soldier endeavoring to escape from a prison cell through a barred window.
Denotes one of a vital, vigorous, and martial disposition who endeavors to cut his way by mind or sword. Danger in early childhood may be overcome according to the power of the horoscope, but danger is never absent from him, and he is liable to be constrained or oppressed with enemies of his own making or he may be a dangerous enemy to himself. To pass through a barred window self-conquest alone knows the way. It is a symbol of Limitation.

I don’t believe in accidents, mistakes, or coincidences.  You have, as I said, Mercury and Mars at this degree.  The two of them are sort of married, fused together and acting as a team in your life.  Mercury is the mind, and Mars is the sword!

Thank you for letting me read for you. Please remember to provide feedback. I’m happy to hear whatever you have to say, even if something didn’t work for you. This helps me become a better reader. I appreciate you getting the word out about me if you like my work. You’d be amazed how much a post on Facebook or a tweet helps!

2 thoughts on “Five-Card Freebie for Nancy”